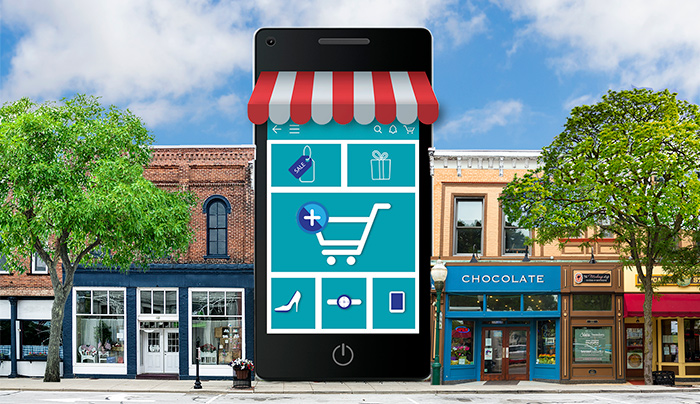 The rise of e-commerce has been a disruptive force in the retail sector. In fact, 5,300 store closings were announced in the first half of 2017 — about three times as many as during the same period in 2016. At this pace, the 2017 total should easily exceed the 6,163 store closings in 2008, the worst year on record. Retail bankruptcies have also been on the rise, with 345 companies filing by mid-year.1

A painful recession was to blame for thousands of retail store casualties in 2008, but for the most part the U.S. economy has been humming along in 2017. The unemployment rate dropped to 4.3% in June, and gross domestic product grew at a 2.6% annual rate in the second quarter, driven by a 2.8% increase in consumer spending.2 So why is 2017 turning out to be such a tough year for retailers?

Brick-and-mortar retailers are losing market share to e-commerce sites such as Amazon. Average monthly sales at department stores were $7.3 billion less in 2016 than they were in 2000, while nonstore retail sales increased by $35 billion.3 The Internet also makes it easier for shoppers to research products and compare prices, reducing foot traffic in stores and limiting pricing power. Here are several more trends that have created challenges for the nation’s retailers.

Profit pressure. Even though many traditional retail chains have invested in e-commerce channels, online sales require higher technology, customer acquisition, and marketing costs than in-store sales, which reduces their profit margins. E-commerce sales increased to 15.5% of total sales in 2016, up from 10.5% in 2012, while retail margins fell from 10.5% to 9%, on average.4

Mall bubble. The shift to e-commerce was preceded by several decades of overbuilding. Between 1970 and 2015, the number of U.S. malls grew twice as fast as the population, leaving the United States with five times more shopping space per person than the United Kingdom, and 10 times more than Germany.5

Debt burden. Some companies are also struggling under heavy debt loads, making it more difficult to turn a profit and fund investments needed to compete in the e-commerce arena. Overall, the amount of retail debt rated by Moody’s has surged 65% since 2007.6

Reluctant shoppers. Many Americans (and especially young consumers) now prefer to spend their money on special experiences with friends and family (such as travel and restaurant meals) rather than material goods such as clothing and jewelry. For example, spending in restaurants and bars has grown twice as fast as all other retail spending since 2005. And 2016 was the first year ever that U.S. consumers spent more money eating out than they spent on groceries.7

Retailers that specialize in goods that are difficult to buy online (such as home improvement supplies) and stores that appeal to “bargain hunters” may fare better than pricier department stores and mall chains that mostly sell apparel and accessories, an e-commerce category that is growing quickly.8 Inside or outside of bankruptcy, many retailers are working to improve their future prospects by renegotiating more affordable leases and reducing their real estate “footprint,” which often involves closing underperforming stores and/or moving into smaller spaces. Other common strategies include elevating the in-store shopping experience, focusing on exclusive brands, and using loyalty programs to reward and retain customers.9

Even so, as many as one-fourth of the nation’s 1,200 malls could close by 2022, primarily aging properties in less prosperous communities. A number of malls with advantageous locations are being redeveloped into lifestyle destinations with activities and entertainment (such as athletic facilities and concert venues) designed to attract foot traffic to the remaining stores and restaurants. Mall tenants are likely to become more diverse, with a wider range of service providers and fewer clothing stores.10

Nearly 16 million people work in retail, many as cashiers or salespeople. From January to June, the U.S. economy shed about 71,000 retail jobs, and job losses could continue as long as the sector continues to struggle.11 E-commerce employment is expanding considerably, but most of these new jobs are in or near metropolitan areas. If large-scale dislocation of retail jobs continues, the economic effects could be worse for rural areas than for larger cities.12

The growth in e-commerce may also be holding down inflation. According to the PCE price index, inflation increased just 1.4% in June over the previous year.13 Consumers have largely benefited from lower prices resulting from intense competition among retailers, some of which now offer to match online prices.

More household names could cease to exist in the coming months, and some of their competitors might even benefit from industry consolidation. In the end, a retail company’s long-term survival may depend on its ability to adapt quickly to an ever-changing market environment.

This information is not intended as tax, legal, investment, or retirement advice or recommendations, and it may not be relied on for the purpose of avoiding any federal tax penalties. You are encouraged to seek advice from an independent professional advisor. The content is derived from sources believed to be accurate. Neither the information presented nor any opinion expressed constitutes a solicitation for the purchase or sale of any security. This material was written and prepared by Broadridge Advisor Solutions. © 2017 Broadridge Investor Communication Solutions, Inc.